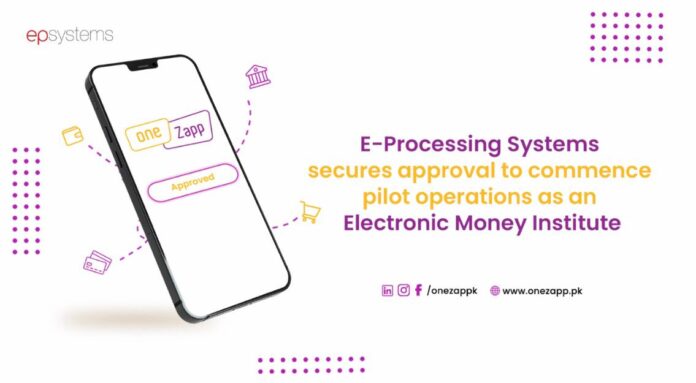 E-Processing Systems Pvt. Ltd. has been granted approval by the State Bank of Pakistan to launch pilot operations as an Electronic Money Institute (EMI).

With this pilot approval, EMI services will be launched under the ‘OneZapp’ brand with the aim to bridge the gap between informal economy and digital financial services by enabling small and micro retailers with the most sought-after use cases so that they can serve the mass unbanked consumers of Pakistan.

OneZapp will have many innovative features and will continue to have more use cases added going forward. In the pilot stage, OneZapp will operate on a limited scope, extending access to only a few thousand users initially by targeting Agents, Merchants and Individuals. Agents and Merchants will be able to accept payments directly from consumers or from other digital wallets in the country and will perform multiple digital financial services such as utility bill payments, mobile top-ups and more to serve the unbanked masses and less tech-savvy population to remove their reliance on physical cash.

The app will also be available to individuals to perform similar services right from their mobile phones.

E-Processing Systems is a subsidiary of Systems Limited and is supported by partners around the world including International Finance Corporation (World Bank Group), Bill & Melinda Gates Foundation, Sarmayacar and Shorooq Partners.

Despite the recent uptick in fintech activity in Pakistan, the adult population still has limited access to formal financial services with only about 16% of the population having bank accounts and this is the problem that OneZapp aims to solve as it grows its retailer network across the country.

OneZapp’s future product strategy is to evolve, innovate and facilitate. With an aim to finally achieve the commercial stage, the company will be working towards amplifying the app with a lot more use cases including debit card, Government payments, educational payments, donations, liquidity solutions and much more.

We expect that as OneZapp moves forward, due to its innovative capabilities and relevant use cases, it will play an even bigger role in improving the financial inclusion in Pakistan.