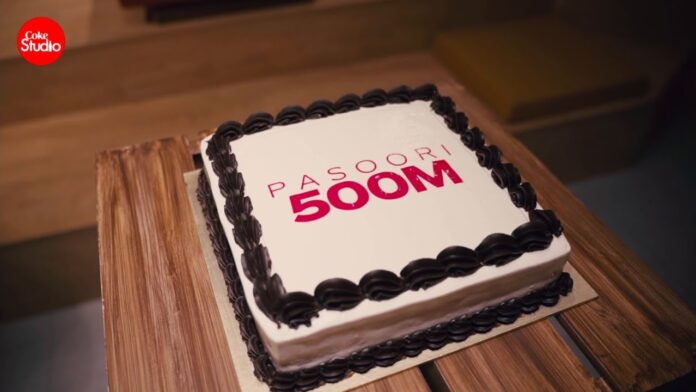 Pasoori, featuring Ali Sethi and Shae Gill, achieves yet another milestone by hitting 500 million views on YouTube. Ali’s soulful voice and Shae’s melodious vocals made each and every human feel alive amidst the chaotic and depressing COVID-19 phase.

The song reached out to every single human being, not just in Pakistan, but also across borders, uniting the youth and the elderly.   Coke Studio 14’s hit number, “Pasoori,” has been making waves ever since its release last year.

From being featured in the fourth episode of the much-acclaimed miniseries “Ms. Marvel” to becoming the most-streamed Pakistani song on Spotify, the track has proven itself to be a formidable feat in the music industry.

Carrying the winning streak further in 2023, Ali Sethi took to social media on Sunday to announce that the popular Punjabi folk tune has now added another feather to its cap by crossing 500 million views on YouTube. This also makes Pasoori the first ever Coke Studio song to reach this milestone.

Taking it to his Instagram, Ali shared the great news. He also shared a few photos of the Pasoori team celebrating their big accomplishment.”Ye Kya Kiyaaa,” wrote Sethi in excitement. The pictures shared by the singer showed him celebrating the achievement with Coke Studio producer Zulfiqar J. Khan and his co-singer Shae Gill.