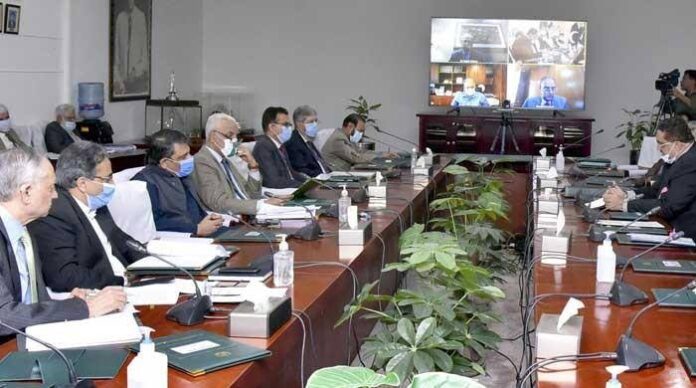 On top of a bumper crop output of 27.2 million tonnes, the Cabinet’s Economic Coordination Committee (ECC) approved the start of the process for importing 3 million tonnes of wheat to build strategic reserves on Wednesday. The committee, however, decided against expanding wheat imports to 4 million tonnes.

Even after the federal budget was presented to parliament, the meeting, presided over by Finance Minister Shaukat Tarin, continued to approve technical extra grants worth Rs56 billion.

The meeting also authorised a revised policy for regulating the receipt of foreign donations by non-governmental and non-profit organisations (NGOs/NPOs), as well as a 50:50 supply of wheat to Khyber Pakhtunkhwa from local harvest and imported quantities.

According to reliable sources, the Ministry of National Food Security and Research (MNFSR) has requested that the ECC increase the wheat import permission to 4 million tonnes for strategic reserves in order to prevent hoarding and black marketing. A previous ECC decision for the import of 3 million tonnes had been authorised by the federal cabinet a few months ago, but the process could not begin.

According to an official release, “the ECC approved the proposal of the MNFSR for the import of 3 million tonnes of wheat subject to clearance by the PPRA Board for building up the strategic reverses of wheat in the country.”

The ECC also approved a proposal by the MNFSR for 500,000 tonnes of wheat from Passco stockpiles to be provided to the KP government during the crop year 2021-22 on the customary terms and conditions.

The “Policy for Regulation of NGOs/NPOs Receiving Foreign Contributions-2021” was also approved in principle by the ECC. The new strategy aims to provide trustworthy organisations more room to play a constructive role in socioeconomic development while discouraging NGOs with questionable credentials.

The ECC also granted $17.3 million for the Pakistan International Airlines-Investments Limited (PIA-IL) to cover recurring and one-time liabilities of the Roosevelt Hotel in New York, as verified by the auditor and recommended by the PIA-IL Board of Directors.

Minister for Information and Broadcasting Fawad Chaudhry announced on Thursday that five Pakistani films would be screened in Beijing as part of the celebrations...
Read more

Minister for Information and Broadcasting Fawad Chaudhry announced on Thursday that five Pakistani films would be screened in Beijing as part of the celebrations...
Read more
Business

Although the National Bank of Pakistan and United Bank Limited have mobilized a deposit base of over Rs. 2 trillion, they are still far...
Read more
Auto